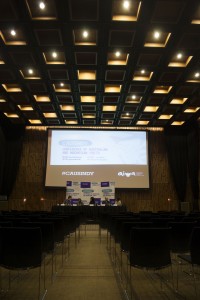 And that’s a wrap for day one!

Delegates have just finished their dinner at the Australian Ambassador’s residence, and they’re heading back to the Mandarin Oriental for a good rest before a busy day two of CAUSINDY 2014.

Finally, an interesting thought for the evening:

Purwani: media consumers in Indonesia, for example, demand stories from the Middle East more than Australia—seen as more relevant #CAUSINDY

See you on day two, it’s going to be great!

(Thanks to Liam Gammon for the photo)

4:25 –  Questions from the floor! Check out our Twitter (@CAUSINDY) for individual questions and answers, but here’s a taste:

.@NatashaArdiani: do media in Australia and Indonesia communicate with each other? Do they read each others’ work? #CAUSINDY

4:10 – Ross Tapsell asked about media ownership in Indonesia and Australia. First point is the axing of the Australia Network and how the loss of the channel leads us into uncertain terrain in terms of cooperation between Australia and Indonesia.

Bachelard pivots the discussion to an Indonesian context and examines Prabowo’s friendly media organisations in the recent election, and TVONE in particular. Influence was obvious. But just how important is it in social media crazed Indonesia?

@causindy Ms. Prabandari: 47% of Indonesians based their voting on media portrayals of the election candidates #CAUSINDY — alyssia pasha (@alyssiapasha) September 14, 2014

The mainstream media’s portrayals of candidates continue to influence elections, but this is changing with large scale adoption of social media (especially in Indonesia).

4:50 – Bachelard on Bali: Rightly or wrongly it dominates Australian media coverage of Indonesia.

Bachelard questions why you hear more about Australians getting into trouble in Bali, than you do in say, parts of Thailand.

“If I get a phone call in the middle of the night, its because Channel Nine wants me to talk about a Bali story on breakfast television.

Bachelard continues: more Australians die in Thailand, but Phuket (and other places) doesn’t dominate the coverage in the same way as Bali does for Indonesia.

4:40 – The panel is well underway! Fairfax Media’s Michael Bachelard: “My job is to ‘translate’ events in Indonesia which will interest Australians – from sublime to ridiculous”.

A single day can span from an in-depth profile on Jokowi to the latest news on Schapelle Corby’s boyfriend.

Bachelard also takes aim at criticisms from Canberra on the reporting of various Australian-Indonesian affairs. He concludes, it shouldn’t be expected that journalists have to prioritise unproblematic diplomatic relations over good reporting.

.@RossTapsell: a shame if we keep repeating the mantra that ‘the media’s the problem’–Complex issue, requires understanding of the industry — CAUSINDY (@causindy) September 14, 2014

4:20 – CAUSINDY Co-Founder and Director, Karina Akib launches CAUSINDY 2014 and welcomes delegates and guests to the first session at SCTV HQ.

4pm (Jakarta time) – Delegates and guests are meeting before our first panel this year, on portrayals in the media and public opinion.

Welcome to the first instalment of this year’s CAUSINDY live blog! We’ll be sharing updates and observations from this year’s conference, including commentary, notes and quotes from our speakers and delegates.

To open, some background information on CAUSINDY 2014:

We’d also like to acknowledge the generous support of our sponsors — especially UTS:INSEARCH, RMIT University and the Australia Awards.

Tim is a member of CAUSINDY's communications team.